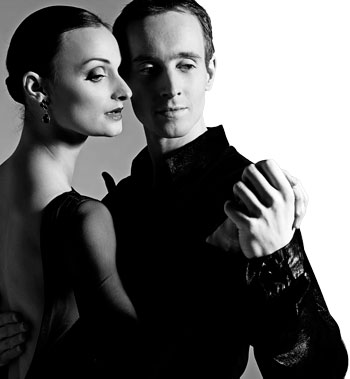 Juggler Menno van Dyke (Amsterdam) has grown up in the theater. His parents being a dancer and a musician.
Having always been fascinated by the circus arts, Menno starts juggling at the age of ten, and later attends the circus school in Paris, where his teacher is the famous Italian juggler Italo Medini.
In 2001 he has his professional debut. His fast paced juggling act is an instant success and the following years he will perform with some of the finest circuses and variety shows in Europe and win several awards at international festivals in Paris, China and Monte Carlo.
In 2005 he meets Emily Weisse and together they start working on a new act, mixing dance, juggling and tango music. Their creation “Juggling Tango” premiers in 2007.

Dancer Emily van Dyke Weisse (Paris) studied at the Ballet School of Rosella Hightower in Cannes in the south of France. She then dances classical and contemporary works by Balanchine, Brumachon and Preljocaj, among others.
She also performs in the French hit-musical “Les Dix Commandements” and
joins the cast of the world renowned Lido de Paris, where she is part of the famous Bluebell girls.
In addition to performing, Emily has always been interested in teaching and creating. She is a certified ballet teacher and has choreographed for shows and acts on many occasions.